The Kansas budget appears to be teetering on the edge of a fiscal cliff, but that’s an illusion.

We’ve already gone over the edge.

Lawmakers approved a budget for fiscal year 2015* that spends $326 million more than the state officially expects to take in.

Covering that $326 million difference almost completely drains the balance in the state’s bank account.  That brings us to the edge of the cliff.

What happens if the FY 2015 revenue does not arrive as estimated?

With the bank balance tapped out, current year spending — already too meager in many areas like education — must be cut, and cut late in the fiscal year when it’s difficult for agencies to make quick adjustments.

That takes us over the cliff.

The official revenue estimate in place for FY 2015 is too high.  The estimate was produced in April with incomplete information about how the dramatic tax policy changes in Kansas had affected FY 2014 income tax receipts.

The chart below shows actual receipts for FY 2013 and FY 2014, and the estimate for FY 2015.  While most of the revenue categories in the FY 2015 estimate are likely reasonably accurate, the individual income tax is not.  (The corporate income tax estimate is possibly a tad too high, and the insurance premium tax estimate perhaps a bit too low.) 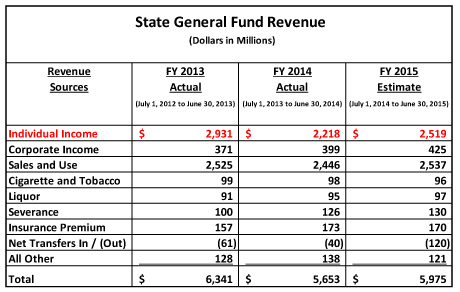 Is it realistic to believe that income tax collections would fall $713 million one year and then rise back up $301 million the next, especially when additional tax rate reductions are kicking in at the same time?**

So why is anyone using this unrealistic revenue estimate? Because it allows for the illusion that the Kansas budget has not already gone over the cliff. It allows that illusion to persist until the revenue estimators meet again to formally revise and update the FY 2015 estimate — something that won't happen until November.

Even if the official FY 2015 revenue estimate turns out to be accurate, the state will arrive at FY 2016 with expenditures more than $300 million above receipts. FY 2016 expenses will be going up to deal with the required increases of Medicaid and KPERS.***
FY 2016 revenue will at best be flat as even more income tax rate reductions kick in.  The bank account will be empty.  Something will have to give.

And that’s the optimistic scenario.

*** KPERS stands for the Kansas Public Employees Retirement System.
Posted by The Kansas Budget at 12:49 PM