Kansas just experienced a huge revenue downturn.  State General Fund tax revenue has dropped more than $700 million in fiscal year 2014 (which closed on June 30, 2014) from the year before.

The Kansas Department of Revenue has advanced an unsubstantiated explanation for the income tax drop that cites a shift of capital gains income as a key cause.  The department's argument is this:  In December of 2012, it seemed probable that the federal government would raise tax rates on capital gains income in 2013. According to KDOR's argument, that caused large investors to declare some of their capital gains income early — in 2012 rather than 2013 — to avoid potential higher taxes later. That, said KDOR officials, then led to lower-than-normal capital gains income claimed in tax year 2013 and hurt Kansas tax collections in FY 2014.

To some degree, this capital gains tax shift likely did happen in every state, but can it possibly be the key cause of a $712 million income tax collection drop in Kansas?
The chart below helps to lay out the parameters of what may have occurred, by showing the most recently available Kansas capital gains income information, compiled and publicly posted by the IRS. 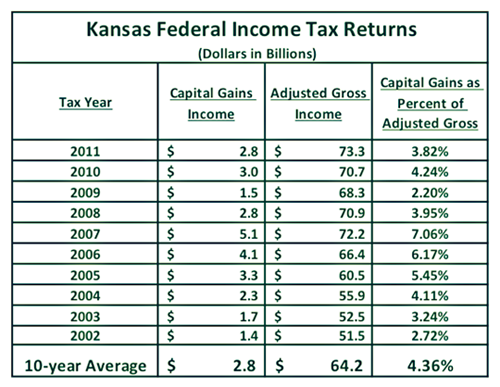 Capital gains have never been a large part of Kansas income.  The complete disappearance of capital gains income could not cause the kind of collection downturn that Kansas has just experienced, and here is why:

Let's assume for a moment that $3 billion in capital gains income shifted from the 2013 tax year to 2012.

If such a shift had not occurred, how much more income tax would Kansas have collected for the 2013 tax year?  If Kansans had claimed another $3 billion of income for 2013 and that income had been taxed at the upper rate of 4.9 percent (the highest rate in place for tax year 2013), at most $147 million would have been added to state income tax collections in FY 2014.

Even $147 million in additional tax receipts — an overly generous assumption — would not have stemmed the tide of our state's $712 million revenue drop.

A capital gains shift may have played a small role, but it should be obvious that the large majority of the income slide resulted from dramatic changes in Kansas tax policy.

(Note: We will not have the information to make an exact capital gains shift calculation for a year and a half. The IRS will add 2012 data later this fall and 2013 data in the fall of 2015.)

In any case, we already know what the latest revenue report means for the Kansas budget:


Kansans, we have a very large problem on our hands!
Posted by The Kansas Budget at 9:33 AM