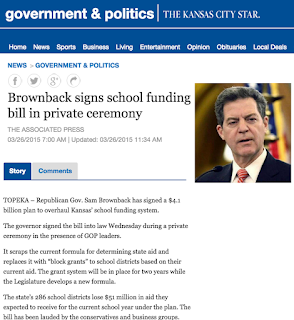 Income should equal expenses. But while that may be logical, the governor did not propose it, and so far, legislators have shown few signs of heading in that direction.

The Kansas budget is structurally out of balance. Future general fund expenses are about $6.4 billion and rising. Income is about $5.8 billion and falling. The state’s bond rating was downgraded because of that structural imbalance, and it will go down again if lawmakers do not fix it.

For two years, lawmakers have been patching up the budget by using limited sources of one-time money.

In FY 2014, Kansas spent $6.0 billion from the general fund, but tax revenue only produced $5.6 billion. The difference was covered by drawing down the “balance” or “savings” in the general fund bank account.

Now in FY 2015, Kansas plans to spend $6.3 billion, even after the governor’s mid-fiscal-year spending reductions. However, the official estimate for tax revenue is only $5.8 billion, and based on results-to-date, the actual amount collected may be lower. The gap is being bridged by wiping out the remaining balance in the savings account, transferring $155 million from the highway fund, and transferring more than $100 million from other funds.

In FY 2016 the gap between revenue and expenses grows to $650 million.

The governor proposes to address the coming gap by cutting expenses $217 million and raising revenue $433 million. However, the expense reductions are unlikely to stick, given that the advance of a school finance block grant bill that spends about $100 million more than the governor proposed.

Half of the governor’s FY 2016 new revenue comes from one-time sources. (See the chart below.) Plus, the governor proposes that any revenue growth over two percent will be used to further lower income taxes, a provision that makes structural balance impossible without severe expense cuts. 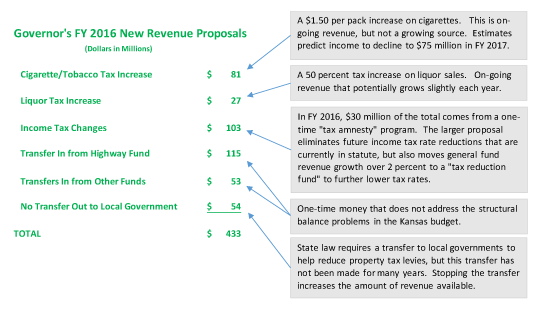 The structural problems in the Kansas budget grew out of unaffordable income tax cuts in 2012 that have caused a steep drop in revenue.

Income tax revenue dropped $713 million in FY 2014. That’s the place to look to correct the problem. The state savings account has already been used up, but that did not solve the problem. Instead, Kansas has been left in a very vulnerable financial position with little flexibility.

Pulling more one-time money from the highway fund may prop up the general fund for another year, but it harms the state road system, and does not solve the main problem.


— This entry first appeared on RealProsperityKS.org on March 19.
Posted by The Kansas Budget at 12:07 PM