Lawmakers Make It Clear: Kansas Has A Revenue Problem 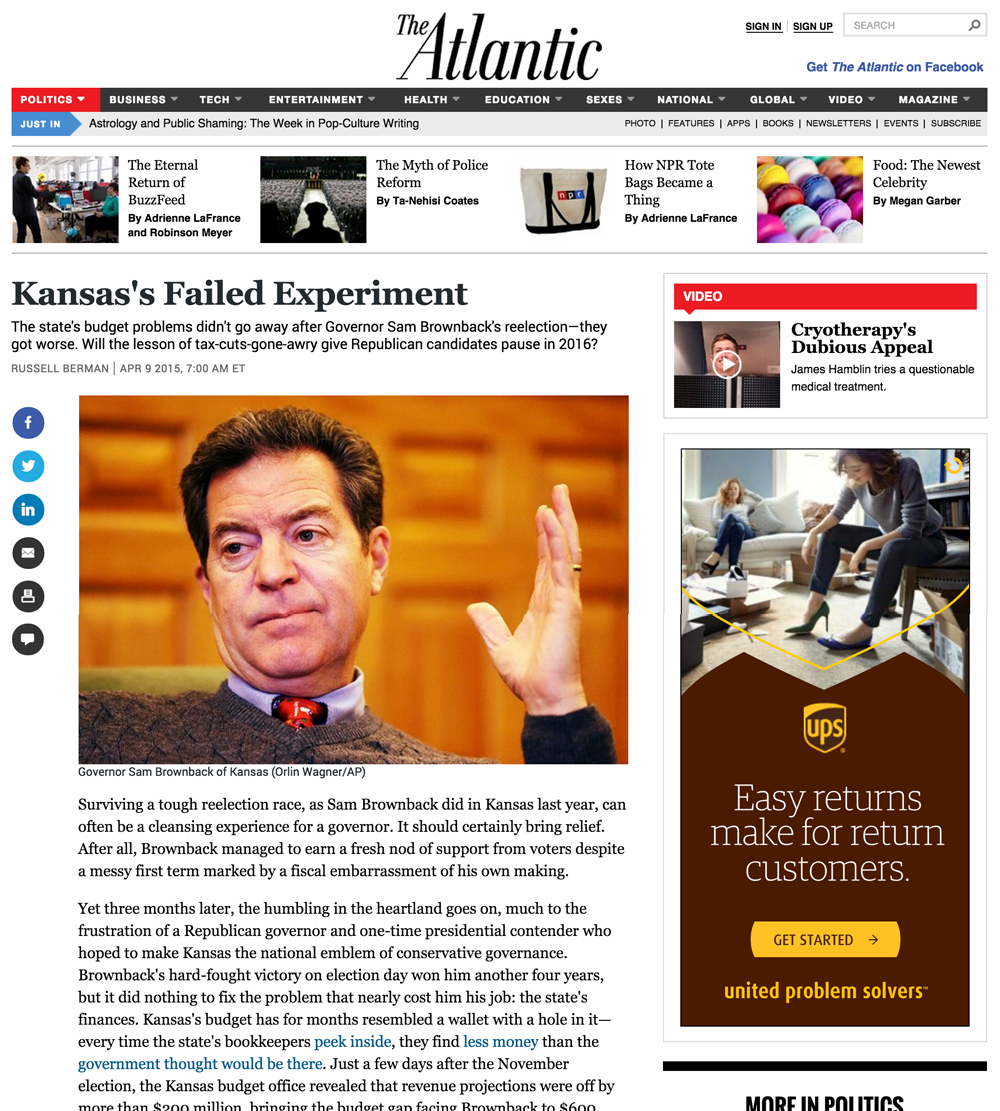 Stop the talk about Kansas having a spending problem. It’s not true, and our lawmakers have just shown how false that claim is.

The Senate Ways and Means Committee has passed a FY 2016 general fund budget with expenditures set at $6.478 billion and the full Senate adopted that budget. Although the House has not voted on a budget yet, the House Appropriations Committee budget position sets spending at $6.477 billion.

Compare the spending in the Senate budget — $6.478 billion — to the FY 2016 official revenue estimate — $5.811 billion. That’s a gap of $667 million. Wow! If Kansas has a spending problem, why did the Kansas Senate, currently a very conservative body, vote to spend $667 million more than they expect to receive?

The Senate-passed budget is not lavish. A clear goal of Senate lawmakers was to crank down expenditures to the lowest possible level. Yet, they still propose spending $667 million more than they take in. The budget puts schools on a block grant, an approach that means cuts and problems for many school districts. University funding goes down. State employees who have foregone salary increases in recent years get nothing again.

If spending is the problem, lawmakers have another $667 million to cut out of the budget in FY 2016. Good luck.

Half of general fund spending in the Senate budget goes to school finance, where a cut means reducing the newly passed block grants. Another 22 percent covers the state share of Medicaid, an increasing cost that lawmakers have little choice but to pay. The Senate allocated 12 percent for higher education, 6 percent for public safety, and 6 percent for other human service programs — none of which are easy to cut, and certainly not to the tune of $667 million.

We don’t yet know how lawmakers will pay for expenses in FY 2016 and FY 2017. Some legislators are hoping the official revenue estimate will go up when estimators do revisions on April 20 — but it’s more likely to go down.

Here’s the bottom line: To be financially healthy, ongoing revenue must be equal or greater than ongoing spending. If Kansas spends $6.478 billion, then the state needs at least $6.478 billion in revenue. If spending will grow in FY 2017 (and it will), then revenue must also grow.

Money transferred from the highway fund is not ongoing revenue. It’s a short-term patch for the general fund that requires offsetting cuts to road maintenance.

The state has a revenue problem that will not fix itself. Lawmakers have to face up to the fact that they must make revenue match expenditures. Unaffordable income tax cuts caused the problem. That’s the place to look for a correction.


— This post first appeared on the Kansas Center for Economic Growth website on April, 9.
Posted by The Kansas Budget at 9:21 AM

Let’s Be Practical About Medicaid Expansion 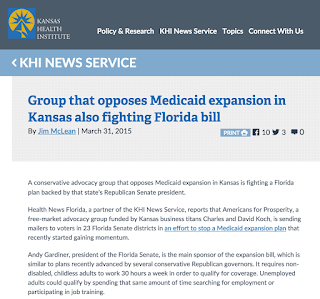 Do 150,000 Kansans get health coverage or not? It’s a moral question and a political one.

The answer should be an easy “yes.” So far, the Kansas Legislature has said “no.”

But there is still time in the current legislative session to change the answer. True, lawmakers have their hands full trying to resolve a very serious budget crisis, but apart from that, no issue carries greater importance than expanding eligibility for Medicaid to more Kansas citizens.

Packed house public hearings in Topeka last week highlighted the advantages, chief of which is that many Kansans in every part of the state will gain health coverage. That alone ought to be enough to convince lawmakers. Kansans are good-hearted people who help each other. Here’s a chance to show respect and care to fellow citizens.

Despite what many may think, it’s currently very difficult for an adult to receive Medicaid services in Kansas. Most childless adults cannot qualify at all, regardless of income. Adults with children must have an annual income (for a family of four) below $9,000 to qualify. Expanded eligibility would move that limit up, and as one proponent suggests, “with one stroke, you could reduce the number of uninsured in this state almost by half.” Expanding Medicaid eligibility also has significant economic benefits for Kansas.

When uninsured people show up sick in emergency rooms, hospitals are required to serve them, but get no compensation, which either raises hospital costs for everybody else, or creates financial distress for the hospital. For some hospitals in Kansas, expanded Medicaid eligibility could mean the difference between staying open or not.

At the start, the federal government will pay 100 percent of the cost to expand eligibility, bringing an estimated $400 million a year to the Kansas economy. Do our federal taxes go down if we turn that money away? No, they stay in Washington or go to some other state. We keep paying the same, but get less benefit for our tax dollars.

Eventually, Kansas must cover 10 percent of the cost, but that is still an incredibly good deal. What if the federal government would offer Kansas $400 million new dollars each year for highways if Kansas would provide a $40 million match? Would the Legislature take the deal? In a heartbeat.

Virtually the entire health community in Kansas supports this, and that broad in-state support was obvious at the public hearings. The hospitals have even offered to pay for the 10 percent match that Kansas must eventually provide.

So what’s the holdup?

Medicaid expansion is tied up with the struggle over Obamacare. States get to choose whether or not to implement an expansion, but that choice is made possible through Obamacare. In the hearings last week, a small collection of opponents expressed dark worries about might happen if Kansas gives ground to Obamacare. The opponents were all recruited and organized by Americans for Prosperity, an organization that has vigorously fought Obamacare nationally. Opponents offered no alternatives for how 150,000 Kansans could gain better health coverage; in fact, some even tried to suggest that they were better off without insurance.

Lawmakers must choose. Should they listen to the Kansas health community, pull $400 million a year into the Kansas economy, and insure many Kansans? Or should they side with organizations fighting Obamacare even though this portion of the national health law has direct advantages?

Twenty-eight states have already made the decision to expand Medicaid eligibility. More will follow. Be practical, lawmakers. For the benefit of everyone in our state, find a way to get that federal money into the Kansas economy and obtain health insurance for more Kansans.


—This post originally appeared in several Kansas newspapers last week.
Posted by The Kansas Budget at 8:38 AM