Kansans, We Are Hanging on by our Fingernails 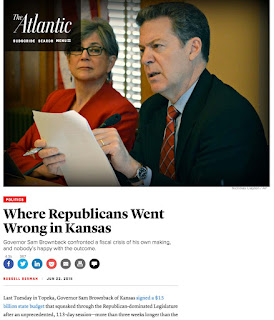 The record-long 2015 Kansas legislative session ended with a record-breaking tax increase. There’s no more potent illustration of the failure of the 2012 tax policy changes than to see 21 Senators and 63 Representatives — including many staunch anti-tax lawmakers — vote for new taxes while attempting to halt a budget crisis brought on by falling revenue.

Trouble is, even after pairing the just-passed tax increase with cut-back expenses, Kansas still hangs on financially by the fingernails.

Lawmakers began the legislative session with a very conservative set of expenses tallying to $6.5 billion, offset by estimated revenue of $5.7 billion — a gap of almost $800 million. In the end they pulled expenses down about $150 million, voted to raise almost $400 million in revenue, and filled the remaining gap with transfers from the highway fund and other funds. As a result, the Kansas general fund remains structurally unbalanced with a FY 2016 income stream of $6.1 billion against expenses of over $6.3 billion.

Here’s how the general fund now looks for FY 2016: 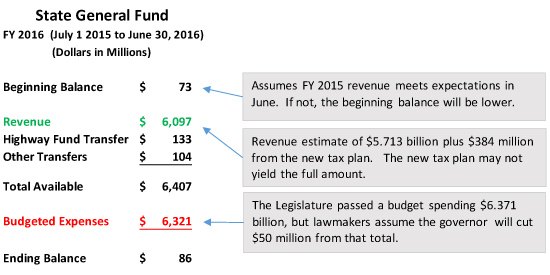 Expenses were lowered from $6.5 billion mostly by increasing the state’s “managed care privilege fee.” The fee, charged to managed care organizations and insurance companies, will likely make health insurance premiums go up for some Kansans, but the proceeds from the fee can be used to draw down additional federal dollars to lower the Kansas share of Medicaid expenses. Plus, the expense budget of $6.321 billion counts on the governor cutting another $50 million out of programs — something he has not done yet.

The various components of the revenue plan tally to a $384 million tax increase in FY 2016, but not all of that revenue may materialize. FY 2016 begins July 1. It will be difficult to implement the sales tax hike quickly enough to get all of the expected revenue from that source in the next fiscal year. An income tax on “guaranteed payments” expected to generate $24 million can easily be avoided by potential taxpayers, and a $30 million “tax amnesty” provision may be overestimated.

Kansas now has an expense budget that has public schools clamped down under block grants, many other programs constricted, state employees without even a cost-of-living raise in years, and another $50 million in cuts to be named later. But even that conservative budget does not balance without transfers from other funds, mostly the highway fund.

What if revenue does not meet expectations?

What if Kansas courts rule that Kansas is shorting funds for public schools?

What happens when we reach the next recession?

Kansas has no financial flexibility to meet these situations, let alone invest in the future. We are hanging on by our fingernails.


— This column originally ran June 17 on the Kansas Center for Economic Growth website.
Posted by The Kansas Budget at 7:08 PM 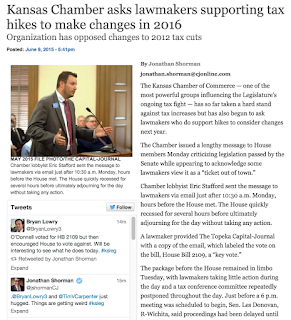 In all the hubbub of the overtime Kansas legislative session, the obvious solution to crippling state financial problems gets little traction. In fact, the governor threatens a veto if it would pass.

Why not undo the tax policy that created the problem? Steep income tax cuts directly caused a massive revenue loss — $700 million in one year.

Before embarking on the infamous fiscal experiment in 2012, Kansas had a stable tax system that most people considered fair. If tax policy had been left alone, our state sales tax rate would now be 5.7 percent instead of 6.15 percent, and the state could easily pay expenses with adequate reserves left at the end of the year. Our state highway fund would be healthy, our bond rating up, and the legislative session long over.

Kansans hold contradictory notions. If given a choice, we prefer not to pay taxes. Yet we value good services — smooth roads, high-quality education, a social safety net — things that cost money. We are not unusual in that outlook. It’s normal. Human nature.

Our governor and lawmakers must find a reasonable, fiscally responsible balance between those competing desires. That’s their key task in every legislative session. For example, going on a spending spree without regard to available resources takes the state out of balance and upsets the citizenry. Likewise, a tax-cutting binge that fails to account for the costs of basic services and bills that must be paid also unhinges the system.

In Kansas, we currently suffer from the latter irresponsible affliction. Income tax cuts that disproportionally benefit the wealthiest Kansans have destabilized state finances.

What happens when income tax rates are cut, and many businesses are entirely exempted from paying? Revenue goes down! That should not come as a surprise, but it appears to have stunned the governor and many Kansas lawmakers. For two years they have tried to tell us everything is fine while they used up the state’s savings account and raided the highway fund to cover up the now-massive budget problem that the income tax cuts have created.

But it’s no surprise any more. Reality has arrived. The state budget imbalance has become so serious that either taxes have to go up sharply or spending on education and other state programs must drop to an unacceptably damaging level.

What to do? Lawmakers don’t know. They are mired in the longest legislative session in state history. The governor and legislative leaders have dithered and weakly allowed the budget process to drift into chaos. Many proposals have been flying. More tax on cigarettes and gasoline. Higher property tax. Raise the sales tax rate to one of the highest in the nation. Eliminate the sales tax exemption on Girl Scout cookies. One proposal would even have the government tax its own purchases, though exactly how that could realistically raise money is unclear.

Instead of doing the obvious thing, lawmakers have been whacking away at programs and trying to add taxes that hit average working Kansans the hardest.

Raising regressive taxes to cover up a past mistake isn’t going to be popular. Most Kansans would rather not pay any taxes, but are willing to pay for quality services if the system is fair. Kansans know by now that forking over higher sales and property taxes or enduring service cuts to pay for a failed policy experiment doesn’t pass muster.


— This column originally ran in a variety of Kansas newspapers over the weekend.
Posted by The Kansas Budget at 1:23 PM