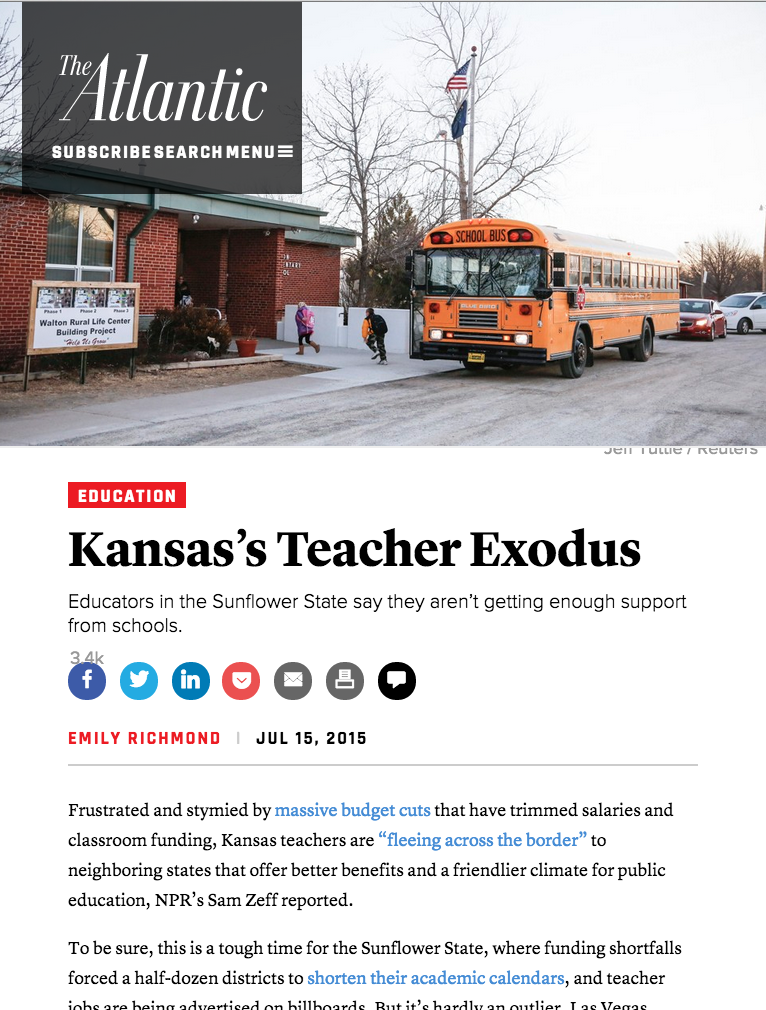 State employees and teachers should be celebrated. They provide valuable service in all parts of Kansas, yet have been on the receiving end of both low pay and disrespect, a direct result of the state’s financial crisis.

State leaders talk about employees as a problem, or as a cost that must be borne. Last fall, Speaker of the House Ray Merrick told the Wichita Eagle that “Government employees produce nothing. They’re a net consumer.” Governor Brownback has not spoken quite as blatantly, but delivers the same message when he insists on only counting “private” jobs in Kansas to measure his economic experiment. “Public” jobs don’t seem to matter to the governor.

Along with the talk, lawmakers have cut away civil service protections, making the state workforce less professional and more subject to political allegiance, and eliminated due process rights for teachers.

Then consider pay. This is the seventh year in a row in which employees have not received any kind of cost-of-living or general pay increase. That perhaps was understandable when the state was mired in recession, but as our economy has recovered, Gov. Brownback has not even proposed an employee pay increase for the Legislature to consider.

Average Kansas teaching salaries have fallen almost to the bottom at 43rd in the nation last year.

Last week 38,000 state employees showed up for work. They engineered our roads and repaired bridges. Some inspected the food we eat. Social workers checked on children at risk for abuse and neglect. At state hospitals and prisons, many worked the night shift or put in overtime hours. Professors, cooks, and maintenance personnel geared up for a fresh contingent of students at universities. Highway patrol officers responded to accidents. Emergency management employees prepared to assist after the next tornado or flood.

In Kansas’s public schools more than 60,000 teachers, administrators, bus drivers, and staff took on a half million students who have a wide range of abilities and learning needs.

We should be glad all of those Kansans came to work, but we must change our approach to keep a vibrant state workforce. The recent Washington Post article, “Why Teachers Can’t Hotfoot it Out of Kansas Fast Enough” lays out why teachers are leaving. The U.S. is experiencing a national teacher shortage. Kansas will never successfully compete for teachers with an offer of low pay and with lawmakers who malign the profession.

The same thing is true in other parts of state government. The Topeka Capital Journal just reported on the staffing problems at state hospitals — for example, 189 out of 501 positions are vacant at Osawatomie State Hospital. KAKE News did a story on similar vacancy problems rampant in the state prison system, a direct result of low pay. The prison system dropped age requirements, and now, for the first time, recruits 18-year-olds as prison guards to fill the void.

State employees and teachers understand the message being sent. If you knew that an employer never gave raises, suggested employees were just a financial drain, and routinely took away benefits and privileges, would you want to work for them?

Primary responsibility to set the tone and policies rests with the Brownback administration, but Kansas citizens should not look the other way. Especially as Labor Day approaches, be thankful for the dedicated state workers we have, and tell our leaders to fix state finances and quit dissing the employees.


— This column originally ran in a variety of Kansas newspapers over the weekend.
Posted by The Kansas Budget at 6:25 PM