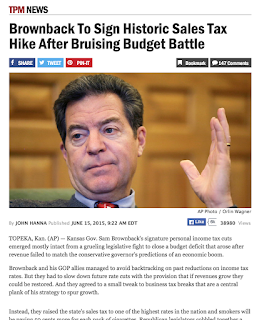 Did you get a paycheck this week? If you did, quite likely your employer withheld money from it to cover your obligation to pay state income taxes. Sorry, but you are part of the group that funds state government.

Do you draw your income from selling things, renting houses, farming, or some other type of business venture? Congratulations! You don’t owe any state income tax.  Enjoy the money. It would be great if you used it to create a job, but you have no obligation to do so.

For the last 3 years, income tax policy in Kansas has roughly divided the citizenry into the paycheck people who pay and others who don’t. It’s fundamentally unfair.

Put in place by the 2012 Legislature, the policy completely exempts individuals who receive business income from any state income tax liability. No other state requires the paycheck people to pay but entirely exempts business income.

Much of the public discussion of this policy has focused on limited liability corporations (LLC’s).   Setting up an LLC is relatively easy. These can be tiny entities or great big businesses, but little or big, the profit individuals make through their LLCs is exempt from Kansas income tax.

However, the policy goes much further than that. Any individual reporting income as business income rather than a wage, or receiving rental income or farm income, is also exempt. In Kansas, more than 300,000 tax filers took advantage of the exemption in the first year.

The policy was ostensibly put in place to create jobs, but those receiving the tax break were given no requirement to do so. They could just as easily bank the money or spend it on out-of-state travel. As a result, the policy has not produced the intended effect. In the years it has been in place, Kansas job creation has been anemic, running behind both the geographic region and the U.S. average.

Legislators, even some of those who originally supported the policy, know it is flawed. “One of the impacts it has created is what I call horizontal inequity,” Senate President Susan Wagle said earlier this year. Wichita Republican Mark Hutton called it an equity issue.  “I’ve had a lot of emails from business owners that want to be included…. They don’t like the fact that people out there believe they’re getting a free break. That’s not good for their business and it’s not good for Kansas and they understand that.”

Legislators made a run at modifying the policy in the last legislative session, but Gov. Brownback stopped them in their tracks by threatening to veto any change.  So unfairness persists.

In June, lawmakers raised the sales tax rate and moved money from the state’s highway fund to narrowly avert a full-blown budget crisis, caused by the income tax changes. However, even after shifting to the much more regressive sales tax, Kansas is still just barely sliding by financially. Each month revenue collections are falling behind expectations, putting even a conservative set of school expenditures and other programs at risk. Tax policy will need to be revisited.

Few of us like to pay taxes. If you have benefited from the business income exemption—nice. If you are a wage earner with a paycheck—tough. And you are right. It’s not fair.


— This column originally ran in a variety of Kansas newspapers over the weekend.