For the Welfare of the Wealthy 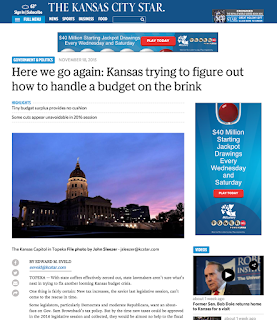 Take stock of what has happened to Kansas tax policy, and then ask the question, “Who benefitted?”  Here’s a hint:  It wasn’t middle class or low income Kansans.

Big changes in Kansas tax policy began in 2012 when Governor Brownback signed sweeping tax cuts into law. Income tax rates were lowered across the board and individuals who receive their income through “business” sources were exempted entirely from paying state income taxes.

Yes, in that action, income tax rates went down for everyone, but at the same time, lawmakers also raised the sales tax and took away credits that helped low income Kansans. Even with the offsetting sales tax increase, the income tax cuts proved so costly that they triggered a severe budget crisis.

In the first year, general fund revenue dropped $701 million, more than 11 percent, jerking the state budget badly out of balance. Lawmakers covered the ballooning gap between expenses and rapidly falling income by using up all of the state’s financial reserves.

With the bank account emptied, lawmakers tried to close the gap by cutting programs, including school funding. And they transferred unimaginably large sums of money from the highway fund and from virtually every other fund in the state treasury that had cash. Despite these irresponsible actions, they fell far short. At that point, even the most conservative lawmakers decided to raise taxes.

What’s the net result of all those tax changes? For the 20 percent of Kansans who earn the least, below $23,000 a year, average taxes actually went up by $197 a year. For the next 20 percent, net taxes also jumped higher. Middle income Kansans essentially broke even. But the top 20 percent of Kansas earners came out far ahead, and the top 1 percent, those who earn more than $500,000 a year, picked up an average tax break of about $25,000. All these figures come from the Institute for Taxation and Economic Policy, a group that has developed probably the best model for measuring these types of changes in any state.

But it doesn’t take a study to tell us what has happened. Any Kansan can see it. A sales tax hike takes a far bigger bite out of a small income than a large one. Lower income Kansans spend a much higher proportion of their resources on food and other items subject to sales tax than wealthy Kansans do.

Kansas now has the second highest state sales tax rate on food in the nation. The shift to sales tax has contributed to making our state’s tax system one of the ten most regressive. The poor pay a far higher percentage of their income in taxes than the wealthy, not a statistic of which Kansans can be proud.

Yet even after shifting the burden of state taxes onto middle class and low income Kansans, the budget is still not working. The tax breaks for the wealthiest of Kansans produced such a huge revenue loss that the state budget remains in the red. Just this month, state officials announced yet another downward revision of the future revenue forecast. So more “fixes” are ahead.

If the real goal was to shift more resources to the wealthiest Kansans, this policy has worked like gangbusters. But if the goal was to adequately fund state programs with a fair taxation system, it’s a wreck. The state budget is in shambles. Unless we change course, the lowest income Kansans and the Kansas middle class will bear even more of the burden of fixing it.


— This column originally ran in a variety of Kansas newspapers over the weekend.
Posted by The Kansas Budget at 11:03 AM 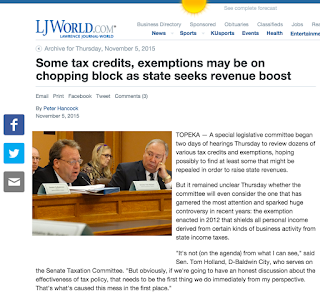 Kansas is in a perpetual budget crisis! In October, general fund revenue fell below estimates - again. The October results mean that Kansas will not have enough money to cover expenses in the approved FY 2016 budget. Without more revenue, Kansans face mid-fiscal year cuts to an already beleaguered budget.

If the state's general fund was actually healthy, what would that look like?

Step 1: Programs for which the state is responsible would be adequately funded. Public schools are a prime example. A financially healthy state provides enough resources for schools to allow them to grow and improve. Kansas, however, hovers on the verge of losing a court case for inadequate funding. School funding has been switched to a block grant, not because that's a more equitable way to distribute funding, or because it is what students need, but because it limits state spending on schools. The same kind of story pervades other parts of the budget-human service programs, higher education, the arts, the state workforce, and economic development.

Step 2: Ongoing revenue would at least equal expenses. When yearly, ongoing revenue equals expenses, a budget is in "structural balance." Kansas lost structural balance with the income tax cuts of 2012, and has not regained it, even after subsequently eliminating income tax credits and deductions, raising the sales tax rate twice, and upping cigarette taxes. The FY 2016 budget is still heavily dependent on one-time money transferred in from the highway fund and many other funds in state government.

Step 3: Kansas would have a rainy day fund and a healthy ending balance. Almost every state has a rainy-day fund, but not Kansas. Plus, states also normally carry a balance from fiscal year to fiscal year. Across the 50 states, the average total balance - rainy day fund plus carryover - at the end of FY 2014 was 9.9 percent of expenditures. According to the National Association of State Budget Officers that average was projected to be a slightly lower figure of 7.1 percent at the end of FY 2016. Kansas law does have a requirement that the year-end carryover balance be 7.5 percent of expenditures. If Kansas actually met that requirement the ending balance would be at least $475 million, not zero. Without a rainy day fund or an ending balance, Kansas is ill-prepared to face the next recession.


Kansas is a long, long way from financial health. Hundreds and hundreds of millions of dollars away. The state lives from paycheck to paycheck, with no reserves. All of the state's energy goes to cutting back, downsizing, and trying to make a growing set of expenses fit within an anemic revenue stream, rather than investing in the future. If that's the new normal, Kansans should be very concerned.


— This entry was originally posted on the Kansas Center for Economic Growth website.

Posted by The Kansas Budget at 8:25 AM

Status of the General Fund 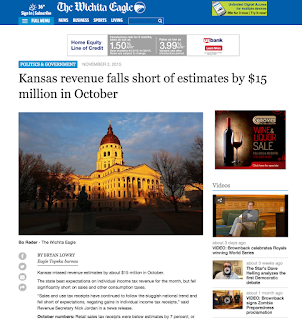 Three months into Fiscal Year 2016 the general fund’s fragile balance has evaporated. The FY 2016 budget is at high risk for mid-fiscal year cuts. If revenue continues to fall below expectations, the governor and lawmakers will have no choice but to take action to either quickly increase revenue or reduce current appropriations.

The chart below shows the October status of the general fund.

The general fund began FY 2016 with $71 million in the bank—far below a financially healthy level. A portion of that small beginning balance resulted from $16 million which remained unspent in FY 2015 because of project delays or other reasons, but the cash carried over to be spent in FY 2016.

Tax revenue in the first quarter of the fiscal year was below expectations each month: $5 million down in July, $30 million in August, and $31 million in September. In late July, the governor ordered transfers to the general fund from the balances of other funds. Those transfers count as revenue, but even after including that extra one-time cash, general fund revenue is $42 million below expectations through September. 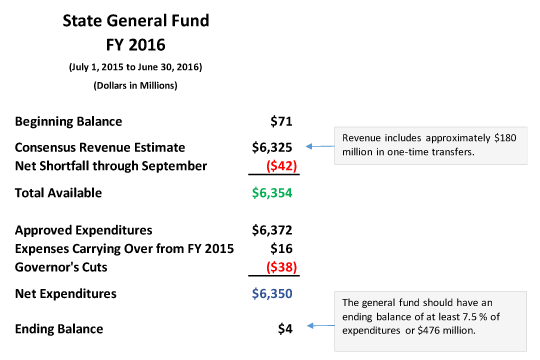 Lawmakers approved expenditures of $6.372 billion for FY 2016 and gave the governor the authority to somehow cut $50 million from that total. The governor did make cuts at the end of July, but less than $50 million, choosing instead to enhance revenue with one-time transfers. Counting the cuts that the governor did make and the $16 million of authorized spending carrying over from FY 2015, expenditures for FY 2016 now total $6.350 billion.

That leaves a minuscule ending balance of $4 million, assuming revenue comes as estimated in the remaining 9 months of the fiscal year.

What if revenue continues to underperform? Recently, Governor Brownback announced that he would not seek tax increases or spending cuts. Then the only realistic option left is to transfer more one-time money from the highway fund or other funds.

It’s important to remember that lawmakers have already approved more than $180 million of one-time transfers to prop up general fund revenue. Ongoing revenue is estimated to only reach $6.1 billion, but may fall short of that. However, even the conservative set of expenditures that lawmakers authorized totals more than $6.3 billion.

Transferring more one-time money will not fix Kansas’s financial problems. The 2012 tax cuts were unaffordable and too deep. Even after the Legislature shifted more of the tax load to the sales tax, Kansas lacks a revenue stream that supports minimal expenditures, and our state continues to be in a perpetual budget crisis.


— This column originally ran on the Kansas Center for Economic Growth website.

Posted by The Kansas Budget at 8:06 AM