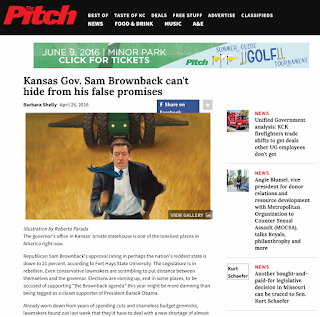 Kansas revenue forecasters just lowered expectations for tax revenue In FY 2016 and FY 2017 by $348 million, putting the budgets for those two years deeply in the red.

Make no mistake. The problem directly results from steep income tax cuts enacted in 2012 and 2013.

Note the chart below. In FY 2013, general fund tax revenue reached a high of $6.333 billion, and then fell to $5.632 billion in FY 2014 after the income tax cuts were fully implemented. Tax revenue stayed at that low level in FY 2015, growing only a scant $85 million. The revised revenue estimate now predicts tax receipts will grow to $5.865 billion in FY 2016 and to $6.039 billion in FY 2017. But remember, that growth only occurs as result of tax increases, passed in the last legislative session, that were supposed to be worth more than $375 million each year.

Again, tax revenue fell sharply in FY 2014, and has never come close to recovering, even after lawmakers imposed the biggest tax increase in Kansas history. Yes, current economic conditions have some effect on revenue collections, but it’s the 2012 and 2013 income tax cuts that have brought down the state budget.

Let’s plug in the new revenue estimate to analyze the effect on FY 2016 general fund finances. The result: With just over 2 months left, the FY 2016 budget is now $137 million underwater. That deficit occurs after a $17 million cut to universities in March, after numerous other program cuts, after freezing school funding in a block grant, and after transferring $280 million from other funds. And that’s after raising the sales tax to the point where Kansas has the highest sales tax on food in the nation.

Now look at FY 2017. Same story. Assuming the governor and legislators somehow erase the FY 2016 deficit, FY 2017 will open on July 1 with a beginning balance of zero, but estimated revenue does not nearly pay for the scrunched-up expenditures approved for FY 2017, leaving an ending balance $174 million below zero.

This situation will keep repeating itself and continue to drag Kansas down, until lawmakers go to the source of the problem and correct it.


—This post originally appeared on the Kansas Center for Economic Growth website.
Posted by The Kansas Budget at 7:03 PM