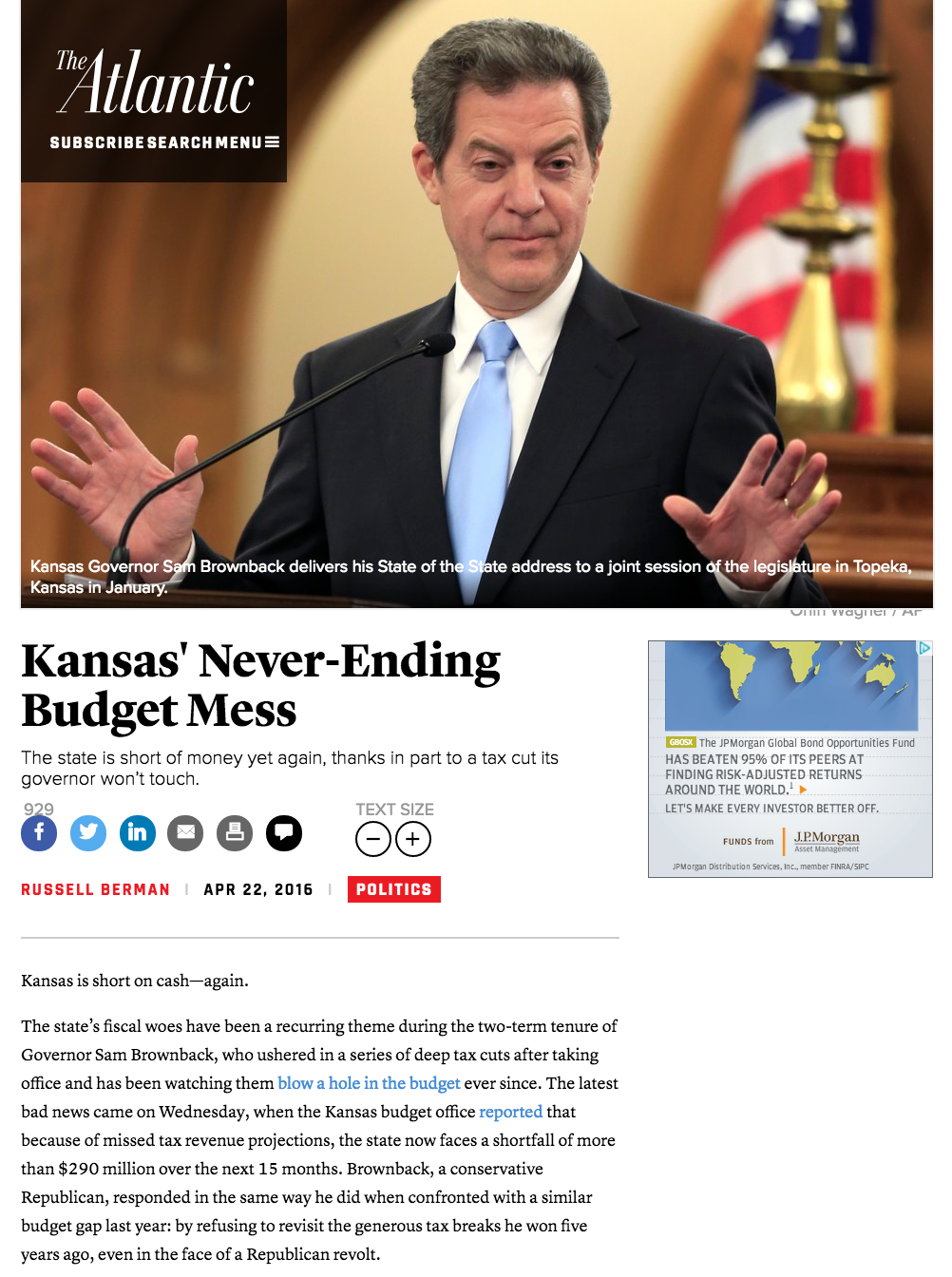 General fund tax collections have failed to meet the mark every month but one in FY 2016. Each instance has triggered expressions of anguish, frustration, and despair, because every miss means something negative—more money transferred away from children, cuts to higher education, lost hope for public schools, or crumbling roads.

Kansas finances have become a high wire act with no net. Lawmakers have an empty bank account and limited options when revenue collections underperform. The financial hole stemming from the 2012 income tax cuts is so deep that even two sales tax rate hikes did not balance the budget.

The revenue estimating misses in FY 2016 follow a rocky record in FY 2014 and FY 2015, mostly a result of inaccurate forecasts of income tax receipts. In FY 2014, the consensus estimate at one point predicted income tax receipts would reach $2.525 billion, but when the fiscal year ended, collections only totaled $2.218 billion—a $307 million miss. In FY 2015, estimators again predicted income tax receipts would hit $2.525 billion, but the actual amount turned out to be $2.277 billion—a $248 million miss. The same pattern may be taking place in FY 2016. The current estimate predicts $2.450 billion, but through March the state has fallen behind last year’s pace.

Granted, establishing an accurate and predictable revenue trend does not come easily when tax policy changes dramatically, or goes where no state has gone before. But the excuses being offered for the recent estimating misses don’t add up.

Multiple administration sources have tried to place the blame on a bad economy. Yet, that does not explain the forecast errors. The revenue estimators had a realistic view of the economy last November. Read their report, and some sample excerpts below:

“Most major economic variables and indicators have been adjusted downward since the Consensus Group last convened in April.”

“Kansas Gross State Product (GSP) growth for 2015 has been reduced to 1.2 percent from the previous estimate of 2.3 percent.”

“Specific to the Wichita area, neither total employment nor manufacturing employment has returned to pre-Great Recession levels.”

“The forecasted price per taxable barrel of Kansas crude has now been reduced to $35.”


The weakening Kansas economy is not a surprise.

Lately, the governor has tried to blame the estimating process itself, intimating that some different method would work better. Don’t buy it.

The Consensus Revenue Estimate (CRE) is a consensus between the State Budget Director (on behalf of the governor) and the Director of Legislative Research (on behalf of the legislature). The two directors and their staffs receive economic data and advice from 3 consulting economists, and they rely on tax data and advice from the Secretary of Revenue.

Nothing gets into the CRE without agreement from the governor’s budget director. Everything in the CRE is based on tax information brought by the Secretary of Revenue. The governor is not a victim of some broken process. Key people in his administration are in charge of it.

The governor’s budget director and revenue secretary have been architects and supporters of the governor’s tax plan. They wanted a different revenue outcome from the one we have, maybe even truly believed in a different outcome, and perhaps that is why they have had so much trouble getting the CRE low enough. Sinking tax collections continue to put the lie to the original promises.

Huge income tax cuts, benefitting mainly the wealthy, have not brought economic prosperity to Kansas. Rather, those unprecedented tax cuts have wrecked the state budget.

Kansas does not need a change in the process of estimating revenue. What our state does need is for the key players to provide a hardheaded assessment of what really is going to happen, not what they hope will happen.


—This post originally appeared on the Kansas Center for Economic Growth website.
Posted by The Kansas Budget at 6:39 PM