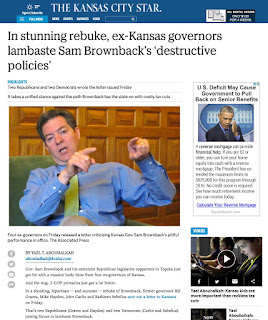 But don’t fault the governor for making such a declaration.

The purpose, to encourage Kansans to be well-prepared to manage money, credit, investments, and debt, is a fine idea. The concept of a financial literacy month has been promoted nationally, and other governors made similar declarations.

Kansas even has a website, KansasMoney.gov, devoted to improving financial literacy. During April, Kansans had the opportunity to win an I-pad mini by registering on the site, and filling out five learning modules “designed to increase your financial IQ.”

Do fault the governor, though, and the legislators backing his policies, for ignoring the very principles they believe the rest of us should use in our own personal financial management.

Take stock of what happened in Kansas during our April financial literacy month. The official revenue estimate was revised downward, plainly showing that Kansas does not have enough income to pay bills. But that’s no surprise. The Kansas budget has been upside down ever since the governor’s “fiscal experiment” kicked in three years ago, dramatically lowering income to the general fund.

The state has survived financially only by using up every dollar in the state savings account, by raiding other funds to shore up the general fund, and by borrowing. Now the governor proposes more of the same.

Here’s one of his solutions: Make only three quarterly payments into the retirement system this year, but promise to make the fourth payment next year, or the year after. Kansans, try that kind of maneuver with your personal finances and see what happens. Call your mortgage company and say you just can’t make 12 house payments this year, so you’ll do 11, but promise, promise, promise that next year you’ll do 13. Don’t expect to win an I-pad mini.

Or get this: The governor’s preferred option would sell future income that Kansas receives from the nationwide tobacco settlement, income that currently pays for early childhood programs. That amounts to a giant payday loan with a terrible interest rate. Kansas would receive a lump sum payment to plug the budget hole this year, but would pledge a much greater sum in future paychecks to pay off the loan.

And this: The governor has announced the cancellation of many planned road projects. Highway maintenance and bridge repair efforts have already been zapped. All so that even more money can be taken from the highway fund to pay general fund bills.

The governor’s “solutions” leave Kansas poorer and less flexible while insuring that the state’s budget problems will repeat the very next year. If you do not have enough money to pay your bills, cleaning out your savings account or taking out a high-interest payday loan or no longer maintaining your house and car will not fix your problem. That’s financial literacy 101.

The governor and lawmakers are flunking state financial literacy, and Standard and Poor’s essentially told them so at the end of April by putting Kansas on a negative credit watch. Kansas already has one of the least favorable credit ratings for U.S. state governments. S&P warned that if Kansas opted for more gimmicks over real solutions, the state’s credit rating, its financial report card, would notch down again.

Election season looms with every Kansas House and Senate seat on the ballot. It’s nice that April was designated for citizens to improve their financial literacy, but it seems most Kansans already have a better grasp than their lawmakers. Before voting, check out legislative candidates carefully. If a candidate supported Brownback’s fiscal experiment and wants to stay the course, being a financially literate voter requires marking your ballot for somebody else.


—This post originally ran in a variety of Kansas newspapers last weekend.
Posted by The Kansas Budget at 10:54 AM