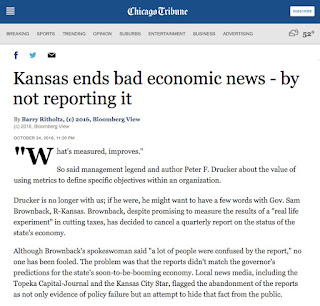 Sam Brownback’s approval ratings as governor of Kansas are dismally low, yet polls show Donald Trump winning Kansas. How can both of those things be true? It does not make sense for Kansans to boo Brownback, but vote for Trump.

Over the last year, Brownback has consistently polled in the 20% approval range, the lowest of any governor in the nation. That almost unimaginable level of repudiation from Kansas citizens stems directly from his failed “Kansas experiment.” Brownback and his legislative allies cut income taxes in a big swoosh four years ago on the premise that the tax cuts would bring jobs and economic prosperity. Instead, the tax cuts broke the state budget and imperiled education, highways, and key services without delivering the promised economic jolt.

The experiment, which primarily benefitted the wealthiest Kansans, did not “trickle down” to middle or low-income Kansans. Rather, with the loss of credits like the food sales tax rebate, and increases in sales tax rates, lower-income taxpayers now pay more than before. Kansans noticed, and blame Brownback for the trouble.

But wait! Donald Trump has an almost identical economic plan: cut taxes sharply for wealthy Americans on the premise that this policy brings economic prosperity. He proposes creating the same kind of loophole for “business income” that Kansans have come to understand as deeply unfair. Past promoters of the Kansas experiment are now key members of Trump’s economic team.

“Our new pro-growth tax policy will be like a shot of adrenaline into the heart of the Kansas economy. It will pave the way to the creation of tens of thousands of new jobs, bring tens of thousands of people to Kansas, and help make our state the best place in America to start and grow a small business.”


Now listen to Donald Trump from the first presidential debate:

“Under my plan, I'll be reducing taxes tremendously, from 35% to 15% for companies, small and big businesses. That's going to be a job creator like we haven't seen since Ronald Reagan. It's going to be a beautiful thing to watch.”

Certainly this presidential election is more than a referendum on economic plans. Voters must weigh many important and complex issues. For Kansans, though, the economic plan should be a prime one. After all, it’s our issue. We are the ones in the front row seats, the on-the-ground witnesses to what happens when leaders go down an irresponsible path.

If you like what Brownback has done in Kansas, Trump may well be your guy.

However, to the majority of Kansans who are Brownback disapprovers: Giving Trump our six electoral votes, even by the slimmest of margins, would foist our troubles on the rest of the nation, and show that we have not yet fully learned the lessons from the Brownback years.


—This entry was originally published this week in a variety of Kansas newspapers.
Posted by The Kansas Budget at 7:19 PM