Who Benefited for the Kansas Tax Cuts? 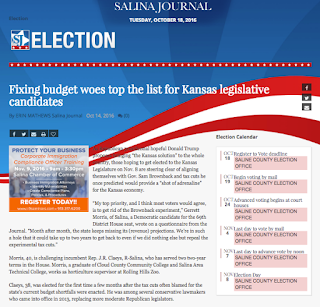 The hard evidence is in.

The bulk of benefits from the income tax cuts that broke the Kansas budget went to a small number of wealthy individuals, while Kansans at the low end of the income scale actually paid more.

The annual report from a year earlier (page 22) provides tax year 2012 stats. Place the two sets of information side by side (chart below), and it becomes easy to see how the benefits were distributed.

Look first at the totals for All Kansas Residents. From 2012 to 2013 income tax revenue drops roughly $700 million.*

Did the lowest income Kansans receive any of that? No.

The next income levels up have a slight tax break, but hardly noticeable. The majority of the benefit—about $400 million—went to about 20,000 returns with an income level of $250,000 and up.

Note that Kansas Adjusted Gross Income (KAGI) drops about $6 billion from 2012 to 2013. Did the real income of Kansans actually go down that much? No.

Federal Adjusted Gross Income for those years does not show that drop (see IRS tax statistics) because it still includes “business income.” The first year that Kansas completely exempted “business income” from Kansas tax liability was 2013, which when excluded, causes KAGI to go down and yields up a tax break mostly for people in the highest income category.

That is not speculation. That is not an estimate. That is precisely what happened, and continues to happen each year.

And remember that these numbers only reflect what occurred with the income tax. They do not show the effect of sales tax rate increases that gave Kansas the highest sales tax on food in the nation, or increased fees for services, all of which take a much larger percentage bite from the incomes of Kansans with the least wealth.

A small group of high-income individuals got a giant tax break.

Kansas got severe financial troubles, poorer services, a budget that does not work, and economic indicators that lag behind our neighbors and the nation.

Was it worth it?

—This entry was originally posted on the Kansas Center for Economic Growth website.
Posted by The Kansas Budget at 7:03 AM