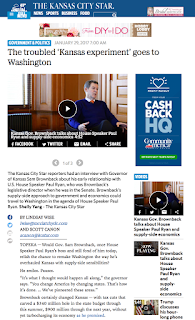 But it’s not.  Not even close.  Unfounded claims and assertions can’t make it so.

Kansas faces a giant gap between recurring revenue and recurring expenses, a gap that opened up immediately when revenue dropped sharply upon implementation of the 2012 income tax cuts.  Subsequently, the FY 2014, FY 2015, FY 2016, and FY 2017 budgets have all been structurally unbalanced, the general fund kept barely solvent by using up reserves, grabbing money from the other funds, borrowing, and one-time tricks.  In each of those years, Kansas became poorer—bank accounts depleted, debt way up, credit rating down.

FY 2017 (July 1, 2016 to June 30, 2017).  In this half-completed fiscal year, the general fund is $350 million short of being able to meet expenses, even though hundreds of millions have already been transferred from the highway fund, and deep emergency budget cuts applied to higher education and Medicaid providers.   The governor’s budget recommends two main things to address the $350 million shortfall:

FY 2018/FY 2019.The Legislative Research Dept. calculates the gap between revenue and expenses at about $900 million per year.  The governor’s recommendations to close the gap can essentially be distilled down to four main financial moves:
Except for the proposed tax increases, none of these recommendations move Kansas toward structural balance by upping recurring revenue or lowering recurring expenditures.  And even if all components of the governor’s tax recommendation would pass, at best the revenue raised only closes about 20 percent of the structural gap.

The governor’s budget appears designed to avoid the obvious.  The income tax cuts that broke the Kansas budget must be revisited and a comprehensive tax reform plan put in place.   That’s the only realistic way to regain structural balance without severely damaging education, key services, and the state’s infrastructure.

The proposed budget from the governor does not open a path to a stable financial future.  It’s a recipe for yet another credit downgrade.  Legislators will serve the state best by disregarding much of it and starting fresh.

—This entry was originally published on the Kansas Center for Economic Growth website.
Posted by The Kansas Budget at 5:37 PM 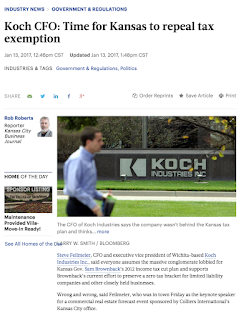 For Kansas legislators, the new year may not feel all that happy. Veterans and first-termers alike have to be wondering why they ran for the job. In the upcoming legislative session, they face a daunting task, brimming with political risk.

Brownback’s “Kansas experiment” has brought the state budget to crisis. Kansas lacks the income to pay its bills, and not by a little. By hundreds and hundreds of millions. The politically thankless task for lawmakers: either restore revenue to meet obligations, or chop up education, highways, human services, and public safety. Doing nothing will result in damaging service cuts by default.

In the current, already half-completed fiscal year, the general fund has come up $350 million short, even after huge one-time transfers from the highway fund and emergency budget cuts to Medicaid providers and higher education. Most lawmakers will feel obligated to address that immediate pressing problem before grappling with the much larger structural gap between income and expense in next year’s budget.

But they should not proceed in that order. Addressing the long-term structural problem in the Kansas budget must have the highest priority! That may seem counter-intuitive, but it’s a bit like the safety instruction you hear from an airline attendant, “If the oxygen masks come down and you are traveling with a child, put your own mask on first; then attend to the child.” Stabilize the budget structure first, and then deal with the current fiscal year.

Only financially awful alternatives exist to cure the $350 million shortfall. Lawmakers cannot logistically raise new revenue fast enough. So that leaves either sudden budget cuts concentrated at year’s end, or some kind of one-time patch. With the bank account empty and the highway fund tapped out, the “easy” one-time patches have already been used up, but insiders talk of selling something (tobacco settlement revenue, the turnpike), or paying bills late, or grabbing the unclaimed property of Kansas citizens, or somehow borrowing the money.

One-time patches do not solve the real problem. Without a long-term solution in place, selling assets or borrowing become just another hopeless component in the downward spiral of Kansas finances.

But if lawmakers can muster the political will to put a long-term plan in place first, Kansas has hope for financial stability. Then a $350 million patch solution in the current year becomes a “bridge” to a more hopeful future, rather than a step into deeper crisis.

Kansas simply must raise revenue to structurally balance the budget. Closing the LLC loophole alone will not fix the problem. Hopefully Kansans will give their legislators political breathing room to pass a broad revenue reform plan correcting the irresponsible decisions of the past. Otherwise, we’ll face damaging cuts to education and key services.

Lawmakers, make it a happy new year for Kansas. End the ill-fated experiment and structurally fix the budget. Do it early in the legislative session. Do it quickly.


—This entry was originally published this week in a variety of Kansas newspapers.
Posted by The Kansas Budget at 11:18 AM

The Gap Lawmakers Must Close

The Kansas budget has a huge structural imbalance, a daunting gap between income and expense. For the Kansas general fund to remain solvent, lawmakers must close the gap.

The general fund became structurally unbalanced immediately after the 2012 income tax cuts were implemented, but the situation has become especially dire now with reserves used up and the highway fund tapped out.

Now consider expenses. Even a constrained set of expenses for FY 2017 totals over $6.3 billion. Block-granted school funding, and emergency budget cuts to Medicaid providers and higher education have already been baked into that number. And those expenses will certainly grow in FY 2018 and beyond. Medicaid costs always rise. Required contributions to the retirement system (KPERS) increase each year. Enormous pressures across state government—no raises for state employees in 9 years, understaffed hospitals and prisons, underfunded schools—will push costs up.

The Legislative Research Department’s general fund profile outlines the grim structural problem. If the gap is closed only by cutting expenses, another $349 million must be chopped during the 6 months that remain of FY 2017, then an additional $582 million cut from services in FY 2018. Closing the gap by forcing expenses below $5.6 billion may be theoretically possible “on paper,” but highly dangerous and irresponsible, if actually done.

Alternatively, the governor and some lawmakers may promote some type of one-time solution—selling assets, borrowing, paying bills late—to address the remaining $349 million shortfall in FY 2017. (Remember, lawmakers have already approved about $400 million in one-time transfers for FY 2017.) But doing that does nothing to fix the structural problem. It only delays the inevitable reckoning and makes Kansas poorer in the process.

The task ahead is critically important, though not politically easy. Many key services, which have already been cut or constrained, now hang in the balance. Hopefully when the next legislative session ends, Kansas will be moving toward financial stability, no longer consigned to downward descent.


—This entry was originally published on the Kansas Center for Economic Growth website.
Posted by The Kansas Budget at 9:35 AM