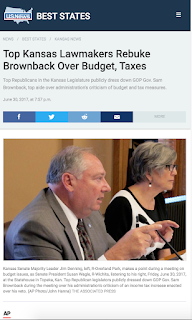 Kansans, we are done being kicked around. For five years we endured the eyes of the nation upon us, judging Gov. Brownback’s tax experiment. We became famous: the poster state for bad tax policy. The takeaway message from those watching was “Don’t do what Kansas did.”

But our narrative has just changed. Earlier this month, a bipartisan supermajority of Kansas legislators overrode a governor’s veto, effectively ending the experiment. Now the headlines trend toward a more positive, akin to “Kansas shows the way out” theme, or “Kansas provides a lesson to the country.”

Indeed, Kansas does show the way out. The experiment ended because a wide swath of Kansans become thoroughly engaged and said, “Enough.”

Kansans wanted their government to work, and wanted public education adequately funded. A practical approach to state finances and a sense of fairness about who should pay taxes triumphed over a discredited “trickle down” tax cut ideology. Gov. Brownback never repented of the financial mistake that defines his governorship, but finally most Kansans could see that his “sun is shining in Kansas” mantra was false.

Certainly, kudos should go to the courageous legislators and legislative leaders who voted to override. Ultimately, though, the real deciders on this issue were Kansans themselves. An override vote that raised taxes and repudiated a governor’s policy agenda could not have happened without strong consent from the populace.

Most citizens prefer not to spend their time thinking about budget and tax policy issues. But by the summer of 2016, an overwhelming number of Kansans had tuned in to those issues. They did not like what they saw and definitively expressed themselves in the August primary and November general elections.

The 2017 legislative session began with one-third of the seats held by new lawmakers. Polling done mid-session showed that two-thirds of Kansas voters disapproved of the Brownback tax plan. That disapproval tracked across all political ideologies. An even higher percentage of voters expressed concern that the state was not investing enough in education. With those lopsided polling numbers, the die was cast for the override. Kansans had decided.

Kansas will be climbing out of the Brownback experiment for years. The override vote did not fix all problems, but at least everyone can take a breath. Our political energy can now focus on the future rather than on crisis management. Our red state status is likely still intact, but the roots of a practical and fair-minded Kansas have started to show through again.

Finally, a word to the rest of the nation: We Kansans are “mopping up our mess,” as Senate Majority Leader Denning put it. We’re turning around. Maybe many of you in other states thought we went nuts with our experiment, but keep any smug feelings in check. The whole nation could so easily go down the same rat hole. The Trump tax plan looms. It’s the Kansas experiment on steroids. Pay attention now, or we will all be mopping up something much bigger.


—This entry was originally published last week in a variety of Kansas newspapers.