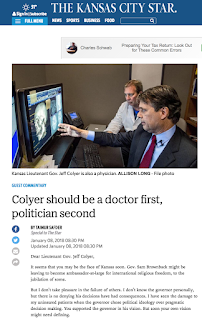 Hello United States. Hello from Kansas. It appears that Congress and the President are about to enact a Kansas-style income tax cut for the nation. Good luck with that.

Kansas went down that road six years ago and ended up with a budget-busting, economic-deadening disaster. Our reputation got kicked around for it, too. The national press focused on telling the story of the Kansas tax experiment, and, as our financial decline deepened, we had to absorb disdain and snickering from around the country: "Haha, what were you all thinking? How could you harm yourselves like that? Don't ever do what Kansas did."

But now as the whole United States is about to do just that, Kansans are done taking guff about self-destructive tax policy.

You see, in Kansas we dealt with our trouble. "We mopped up our mess." Kansas citizens educated themselves, saw the mistake, and corrected it. Kansans did not figure it out in time to keep from narrowly re-electing Sam Brownback in 2014. By 2016, though, Kansans were upset enough to change the Legislature and give the tax experiment the big boot.

To be sure, much work remains to bring Kansas back to financial health. And while surveys show that a large majority of Kansans now believe our tax cuts were wrongheaded, not everyone owns up. Note, for example, our out-of-touch congressional delegation casting votes for the U.S. tax plan. Or the hometown Koch-funded Kansas chapter of Americans for Prosperity spending a million dollars to mail Kansans mega-numbers of postcards bashing legislators who successfully voted to reverse the Brownback tax plan.

Even so, our hard-won experience and newly-achieved turnaround allow us to offer lessons:

First, tax cuts don't pay for themselves. The revenue loss from the Kansas tax cuts was steep, immediately throwing the state budget badly out of balance. The U.S. tax cut plan will add more than a trillion dollars to the national debt and threaten Social Security and Medicare, just as the Kansas plan threatened public education and highways.

Second, tax cuts for the wealthy don't trickle down. The Kansas plan primarily cut taxes for the wealthiest, while lower-income Kansans ended up paying more. Promised new jobs never arrived. Likewise, corporations and people with substantial "pass through" income benefit most from the national plan.

Finally, and more hopefully, rotten tax policy can be corrected by an engaged citizenry working together in a bipartisan way.

But alas, it looks like the U.S. will pay little heed to Kansas's lessons. The die appears cast. Just don't ever say one more derogatory thing about Kansas.

Kansas is a special state and a fine place to live. The prairie is beautiful. We place high value on public education. Kansans are friendly and hard-working. And practical. Deep down we know we have to have enough income to balance our budget and pay for the quality of life we value. We lost that balanced approach during our tax experiment, but we got it back.

Best wishes to the United States.